From October 8th to November 1st, I am blogging about the White Plains “campaign” of 1776. Click here for an overview of this project, a listing of the sources used, and other general information.

This is the fourth of four posts chronicling the events of October 28.

Synopsis for the evening of October 28th: The battle of White Plains came to an end; Washington prepared for the next British move; Knyphausen occupied Mile Square.

The battle of White Plains gradually petered out after the British and Hessian infantry broke the American line on Chatterton’s Hill.

Joseph Plumb Martin (5th Connecticut State Battalion) recalled that after his regiment was driven from Chatterton’s Hill, “We fell back a little distance and made a stand” and at the same time “detached parties [were] engaging [the enemy] in almost every direction. We did not come in contact with the enemy again that day, and just at night we fell back to our encampment.”

The “detached parties” probably included some groups of Continentals on the northern end of Chatterton’s Hill. Colonel John Haslet of the Delaware Regiment recalled:

“The left of the regiment took post behind a fence on the top of the hill with most of the officers, and twice repulsed the light troops and [light] horse of the enemy; but seeing ourselves deserted on all hands, and the continued column of the enemy advancing, we also retired.”

Captain William Hull of the Webb’s 19th Continental Regiment stated that his command also held out for awhile:

“Colonel Webb’s regiment maintained the conflict for a time, after the other part of the brigade had abandoned the field, and it had the honour to receive the particular thanks of Washington for its bravery and orderly retreat.”

One observer (Sergeant John Smith of Lippitt’s Regiment) wrote, “this battle lasted from 9 in the morning till night tho the hottest of the battle… was but about 20 or 30 minutes”.

During this prolonged phase of the fighting, Washington sent some reinforcements towards Chatterton’s Hill, including Brigadier-General Rezin Beall’s brigade of Maryland militia (the Maryland “flying camp”) and Sargent’s 16th Continental Regiment. However, as Jacob Francis of Sargent’s Regiment noted, before these troops could cross the Bronx, “the British got possession of the hill, and we retreated back to the camp.”

Afterwards, the British made no further attacks. According to Captain Johann von Ewald (2nd Jäger), “Since the soldiers had climbed over nothing but hills, cliffs, and stone walls the whole day, constantly dragging their guns over all obstacles, it was impossible to ask anything more from them.”

The British lost around 230 men during the battle: Most of these losses occurred in the 28th Foot (67 men), 35th Foot (about 60 men), 49th Foot (28 men), and Regiment von Lossberg (about 46 men). The Americans lost more than 200 men [see Footnote 1], but the exact total is not known. Among the regiments that had considerable losses were the Maryland Battalion (44 men), the 3rd New York Regiment (34 men) and the Delaware Regiment (32 men).

During the evening, the British discovered that Chatterton’s Hill was of dubious value. Charles Stedman noted: “The possession of that hill… [did] not enable the royalists to annoy their camp, for it rose so gradually from the Bronx that its crest was not within random cannon shot”. In other words, the British could hit the main American defensive works with their cannon, but the range was too great for the fire to be accurate or destructive.

Stedman couldn’t understand why the Americans had detached a part of their army to defend Chatterton’s Hill. He wrote: “The reason of their occupying” the hill “is inexplicable… It seems to have been a blunder of General Washington’s to have placed so considerable a corps entirely out of the capacity of supporting the rest of the army”.

Stedman believed that if the British had attacked the center of the American line instead (as he wanted), the men on Chatterton’s Hill would have had a hard time aiding in the defense. [see Footnote 2]

The Americans kept close watch on the British, not knowing when another attack might come.

Jacob Francis (Sargent’s Regiment) recalled, “I stood sentinel that night in a thicket between the American camp and the hill, so near… that I could hear the Hessians”.

“The enemy had several pieces of field artillery upon this hill [Chatterton’s], and, as might be expected, entertained us with their music all the evening. We entrenched ourselves where we now lay, expecting another attack. But the British were very civil, and indeed they generally were, after they had received a check from Brother Jonathan, for any of their rude actions”.

Meanwhile, Washington decided that the American army would be in a stronger position if it occupied the hills further north (agreeing with the assessment Major-General Charles Lee made that morning). Therefore, some of the troops were ordered to begin moving their camps to the new position.

Washington expected that the British would either launch a major assault against his defensive works or move to threaten his flank. To shore up his right flank, he sent William Alexander’s brigade (Spencer’s division) to occupy high ground between White Plains and the Hudson River.

Alexander’s brigade moved quickly, and without their baggage. It was a hard night for men already exhausted by the day’s fighting. Lieutenant-Colonel Gunning Bedford of the Delaware Regiment had been shot in the arm on Chatterton’s Hill (it was a flesh wound). He wrote that he and his men spent the night “without a tent or anything but the ground to lay on, and not a blanket to cover us”. Similarly, Lieutenant Enoch Anderson of the Delaware Regiment remembered that “This night we lay in the woods without tents or blankets. It was cold and we made a fire in the woods,--turned our feet to the fire and slept comfortably, although it snowed in the night.” 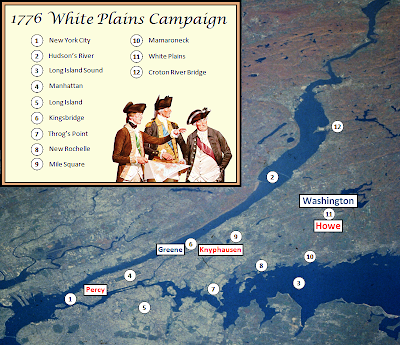 Situation of the armies on October 28th (click to enlarge). While Howe fought Washington at White Plains (11), Knyphausen advanced on the Mile Square (9) / Valentine's Hill area.

Off to the west, Colonel John Lasher had a detachment of men guarding the landward approaches to Manhattan. After the British raided Mile Square he was ordered to abandon his position and join the American army at White Plains. On this date he burned the American barracks at Kingsbridge and set out on a wide arch that would take his men north and east towards White Plains, and around the British army.

The same day, Lieutenant-General Wilhelm von Knyphausen, occupied Valentine’s Hill with his division of Hessians. These troops missed cutting off Lasher’s command by a matter of hours. However, by seizing Valentine’s Hill they did cut off the landward retreat of the American forces garrisoning upper Manhattan.

Footnote 1: I’ve estimated a greater American number of casualties than are stated by most authors. If one simply totals up all the numbers available in Peter Force’s American Archives, the total is 53 killed, 96 wounded, and 24 missing (or 175 in total). The relatively high proportion of killed to wounded is at least partially due to the fact that two regiments reported only the former total, not the latter. After estimating, through extrapolation, the number wounded in these regiments, the total American loss becomes about 197.

Doctor John Pine of Maryland wrote after the battle, “the number of killed and wounded, as the report is in the camp, amounts only to about 90, but from the wounded I saw myself in the hospital, and adjacent houses, there must at least be an hundred and twenty or thirty wounded[,] the number of killed I don’t know.”

Documents show that there were several casualties between the Pennsylvania State troops and New Hampshire militia not listed in Force. Brooks’ and Moseley’s Massachusetts militia regiments likely suffered a fair number of casualties on Chatterton’s Hill, but no return exists of their losses. A conservative estimate of losses in these units, added to the losses in the other units, raises the American total to close to the reported British total.

Footnote 2: To the best of my knowledge, Washington did not describe why he chose to defend Chatterton’s Hill. Tallmadge claimed he alerted Washington to the presence of American militia on Chatterton’s Hill and the advance of British troops in their direction. Afterwards, Washington directed several units to the hill, and ordered a trusted officer (John Haslet) to take command of the militia. Perhaps Washington intended simply to support troops (militia) that were well-positioned to impede the British attack. In other words, the defense of Chatterton’s Hill may have been another manifestation of Washington’s general strategy of harassing the British at every opportunity (consider how Washington used his forces on the 21st, the 26th, and the morning of the 28th). The Staten Island raid, the American defense of Pell’s Point and the engagement near East Chester can be understood in these terms as well.