At the beginning of this month, I wrapped up a series of daily posts on the battle of White Plains, and the events leading up to it. As much as I enjoyed working on that project, I'm glad to be back to a slower pace of blogging. In the upcoming weeks there were be scattered posts on the history of the Revolutionary War interwoven with posts on military miniatures.

Several of the history posts will be concerned once again with the White Plains campaign. Among other things, I plan on arguing that George Washington deserves more credit for his decision making during the White Plains campaign than he has received and that the battle of Pell's Point was an important event of the Revolutionary War -- but not for the reasons that authors say it was important.

As far as miniatures are concerned, my plan is to paint up some additional units that served in the southern campaign of the American Revolution. The first ones I’ll be painting are the Volunteers of Ireland (background, below) and the 63rd Regiment of Foot (foreground, below). The figures are primed and ready to go (click to enlarge). 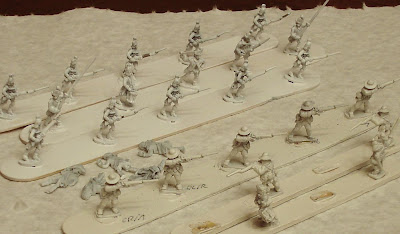 To the best of my knowledge, no one makes 15mm-high Volunteers of Ireland soldiers. The ones shown here are modified American light infantry figures sold by Stone Mountain Miniatures. Hopefully, when painted, they'll come out looking something like John D's 25mm-high version of the regiment.

Having these two units painted will help give me some additional options for modeling battles in miniature. The Volunteers of Ireland fought at Camden and Hobkirk’s Hill. The 63rd Foot fought at Hobkirk’s Hill and Blackstock’s Plantation.
Posted by AD at 12:51 AM