The Americans at Guilford Courthouse

In this post I briefly describe the American army that fought at the battle of Guilford Courthouse and I show a 15mm-version of this army that I put together.

The American army at Guilford Courthouse consisted of a variety of units including infantry, artillery, and cavalry, Continentals and militia, old soldiers and new recruits. The order of battle, described below, is based primarily on two sources. The first is an obscure (but enormously valuable) troop return that was completed 2 days before the battle. The second is a recent history that provides a wealth of information on the individual units. [1] 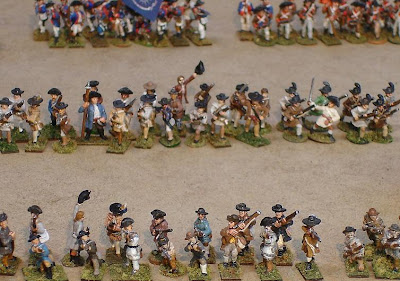 Here is the finished American army. One 15mm figure represents 20 actual combatants. The figures have been arranged into three lines, as they were during the historical battle, but this image is not meant to convey the details of their historical deployment (this will be covered in an upcoming post).

The second line consisted of the two brigades of Virginia militia [10].

The third line consisted of the two brigades of Continentals. The Virginians are on the left, and the Marylanders are on the right [10, 11]. 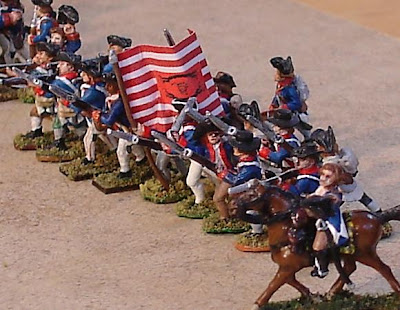 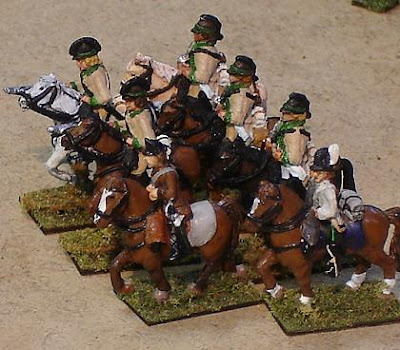 American Dragoons. These include some newly-painted Lee's Legion dragoons and a couple of older militia dragoons.

1. An electronic copy of the troop return is available in the George Washington Papers hosted by the Library of Congress. See here.

In general, I will be talking about the formations within the American army very loosely. The exact composition of these units falls outside the scope of the research that I’ve conducted, and the reader is advised to see Babits & Howard, ibid. for much more detail on this subject.

3. Readers may note that my interpretation of the American order of battle differs slightly from that of Babits & Howard, ibid. For example, I count the Virginia and Delaware light infantry companies towards the troop totals for the Virginia and Maryland brigades, respectively, whereas Babits & Howard did not. To be clear, I agree with Babits' & Howard's interpretation of the role these light infantry companies played during the battle.

4. Lieutenant-Colonel John Eager Howard later summarized the situation of the Maryland line at this time. He wrote:

“The Maryland line consisted of 7 regiments about half full when we marched into [South] Carolina. After the actions of the 16th and 18th of August 1780 [i.e., Camden and Fishing Creek] what men we had left were formed into two regiments and the supernumerary officers sent home.--The Maryland troops with me at the Cowpens were picked out of the two regiments….

“There was a new regiment (Regiment Extraordinary) sent out from Maryland which had been raised by the state, and it was thought that the officers had been more favored than the officers of the old regiments. It joined us a few days before the action and there were such jealousies among the officers that Genl Greene sent all the new officers home, and made a new arrangement of the two regiments. This was at the time my light infantry [i.e., the troops at Cowpens] joined their regiments. The most of the new men were thrown into the second regiment which was very deficient of officers.”

5. The two companies were commanded by Captains Robert Kirkwood and Peter Jacquett. Kirkwood’s company, which greatly distinguished itself at Cowpens, was assigned to William Washington’s flank corps. Jacquett’s company is thought to have served with the 1st Maryland Regiment, but this hospital return, transcribed by Will Graves, seemingly shows that it was with the 2nd Maryland.

7. The gun sections were commanded by Captain Anthony Singleton and Captain Ebenezer Finley. The artillery is notably absent on the March 13 troop return. Were these men treated as part of the infantry brigades? In my calculations I assumed they were not.

8. Babits and Howard, ibid., make a good case that some North Carolina Continentals served at the battle. They proposed that these men were assigned to protect and assist the American artillery.

9. Histories of the battle represent Eaton’s and Butler’s North Carolina brigades as equal in size, but the troop return shows that the former dwarfed the latter. I’m presuming that the imbalance was not as great during the actual battle (e.g., perhaps the men detached to guard the baggage were chiefly drawn from Eaton’s brigade).

10. The troop totals indicated in the pictures above do not exactly match the strength listed above. This is because 1) I added counted noncommissioned officers, musicians, and most commissioned officers when calculating how many figures I needed, 2) I took into consideration that some militia joined the battle after March 13, and 3) I took into consideration that Greene detached a large force of men (mostly, if not exclusively, North Carolina militiaman to judge from pension applications) to guard his baggage train before the battle. I don’t believe the number of men that joined after the date of this return or that were assigned to the baggage train is known; my additions and deductions are speculative.

11. The colors shown carried by the Virginia and Maryland regiments are ahistorical; I wrote about these in a previous post.