Battle Flags for the Continentals

This month I am working chiefly on a battle of Guilford Courthouse-themed project. The last couple of days I prepared some flags for the British and American regiments that fought at that battle.

Flags were not always carried by military units into battle. Some units (probably militia units in particular) did not have them, and other units that did have flags chose not to carry them. There is reason to believe that flags were carried by at least some of the units at this battle. For example, a North Carolina militiaman recalled that the British troops carried "gay banners floating in the breeze" [1].

A few of my miniatures come with attached metal flags. More come with a metal flag pole, but no flag. In these cases one must buy or make a miniature flag for the figure, and then attach it to the pole with glue. I decided to try making paper flags.

I started with two simple cases: the British 23rd and 33rd Regiments of Foot. The flags for these regiments are well documented and electronic copies can be found online. I first downloaded and prepared two sides for each flag using MS Paint. Then I resized the flags to fit 15mm miniatures, and printed them off on a home printer. Finally, I cut out the flags, glued the two sides together and attached them to a flag pole. You can see the results below for the 33rd Regiment. 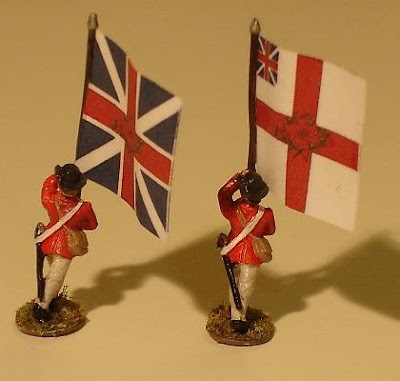 The result is not perfect (e.g., the edges require a bit of touch up), but certainly pretty good.

I therefore decided to generate some flags for the 1st Maryland and 1st and 2nd Virginia Regiments [2]. Although the historic appearance of these flags is not known, it's possible to draw inferences based on other regimental flags from this period. For example, it appears that stars and stripes were probably common elements on flags (although interestingly they probably did not often occur together); other recurring elements seem to have included patriotic words and phrases, a personification of liberty or America, liberty trees, rattlesnakes, and wreaths and banners. Inspiration can also be found in the flags created by reenactor units and known facts about the regiments (e.g., the 2nd Virginia was known as the "hell-fired blues" [3]).

Using MS Paint I began by making variants on a few simple patterns, but I soon got carried away and generated a slew of flags with these various elements.

Here is one of the full-sized flags (note the paper is intended to be folded in half to give the flag two sides):

And here is the complete set (if you click to enlarge you will see them at actual size for 15mm miniatures) [4]. 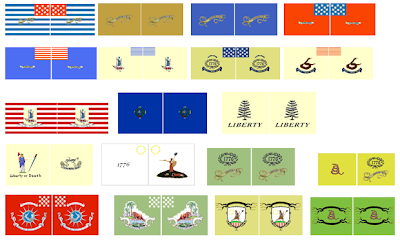 So now I have to make a decision -- which of these flags looks most authentic? Which should I use with my Maryland and Virginia regiments? I'm having trouble deciding, and your suggestions are appreciated.

2. In the source material, the Virginia regiments are generally referred to as John Green's and Samuel Hawes' regiments. Babits and Howard, ibid., refer to them respectively as the 1st and 2nd Virginia Regiments, and I am following suit.

3. See pension application of Lewis Griffin, transcribed by Will Graves.

4. A group of 1st Maryland reenactors carry a flag like the one at upper right in the set. The red and green flags at lower left are "Gostelowe" flags, and a flag resembling the green Gostelowe flag (it depicts a beaver gnawing on a tree trunk) was captured by the British at the battle of Waxhaws.